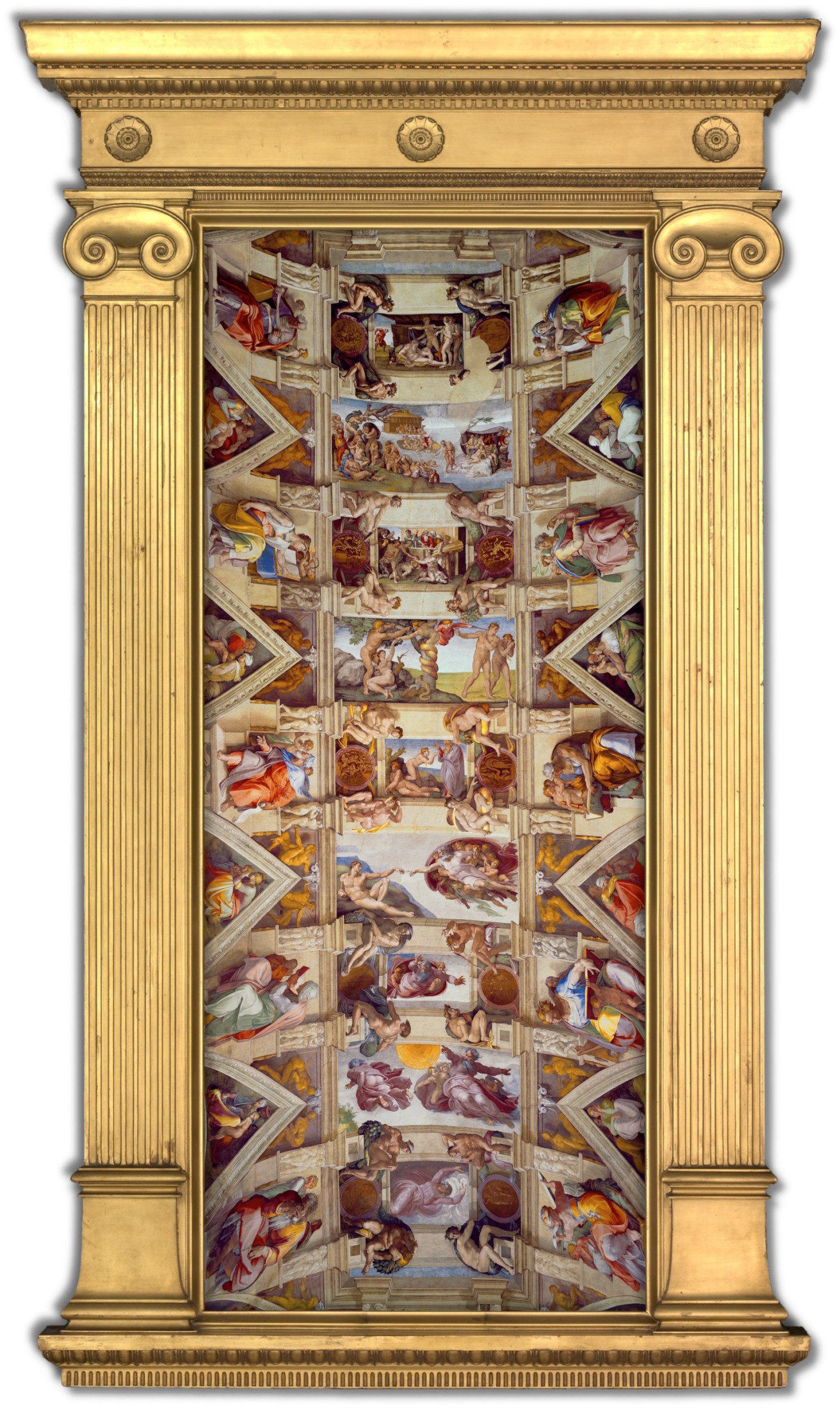 In 1505 Michelangelo was invited to Rome by the newly elected Pope Julius II and commissioned to build the Pope’s tomb, which was to include forty statues and be finished in five years. Under the patronage of the pope, Michelangelo experienced constant interruptions to his work on the tomb in order to accomplish numerous other tasks. Although Michelangelo worked on the tomb for 40 years, it was never finished to his satisfaction. It is located in the Church of San Pietro in Vincoli in Rome and is most famous for the central figure of Moses, completed in 1516. Of the other statues intended for the tomb, two, known as the Rebellious Slave and the Dying Slave, are now in the Louvre.
During the same period, Michelangelo painted the ceiling of the Sistine Chapel, which took approximately four years to complete (1508-1512). According to Condivi’s account, Bramante, who was working on the building of St. Peter’s Basilica, resented Michelangelo’s commission for the pope’s tomb and convinced the pope to commission him in a medium with which he was unfamiliar, in order that he might fail at the task. Michelangelo was originally commissioned to paint the Twelve Apostles on the triangular pendentives that supported the ceiling, and to cover the central part of the ceiling with ornament. Michelangelo persuaded Pope Julius to give him a free hand and proposed a different and more complex scheme, representing the Creation, the Fall of Man, the Promise of Salvation through the prophets, and the genealogy of Christ. The work is part of a larger scheme of decoration within the chapel that represents much of the doctrine of the Catholic Church.
The composition stretches over 500 square metres of ceiling and contains over 300 figures. At its centre are nine episodes from the Book of Genesis, divided into three groups: God’s creation of the earth; God’s creation of humankind and their fall from God’s grace; and lastly, the state of humanity as represented by Noah and his family. On the pendentives supporting the ceiling are painted twelve men and women who prophesied the coming of Jesus, seven prophets of Israel, and five Sibyls, prophetic women of the Classical world. Among the most famous paintings on the ceiling are The Creation of Adam, Adam and Eve in the Garden of Eden, the Deluge, the Prophet Jeremiah, and the Cumaean Sibyl. (Source: Wikipedia)