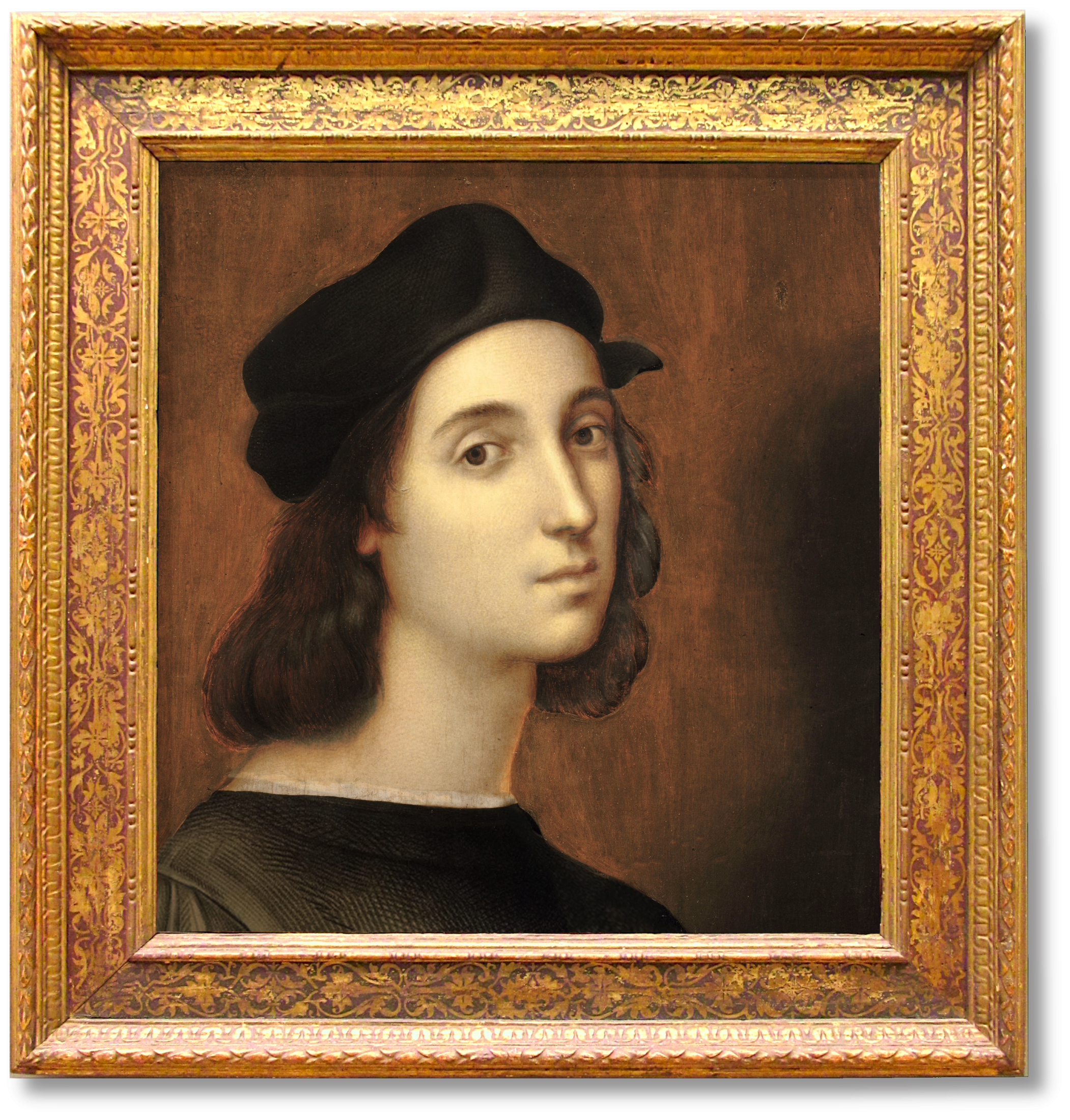 AFFAELLO Sanzio da Urbino, better known as simply Raphael, was an Italian painter and architect of the High Renaissance. His work is admired for its clarity of form, ease of composition, and visual achievement of the Neoplatonic ideal of human grandeur. Together with Michelangelo and Leonardo da Vinci, he forms the traditional trinity of great masters of that period.
Raphael was enormously productive, running an unusually large workshop and, despite his early death at 37, leaving a large body of work. Many of his works are found in the Vatican Palace, where the frescoed Raphael Rooms were the central, and the largest, work of his career. His best known work is “The School of Athens” in the Vatican Stanza della Segnatura. After his early years in Rome, much of his work was executed by his workshop from his drawings, with considerable loss of quality. He was extremely influential in his lifetime, though outside Rome his work was mostly known from his collaborative printmaking.
After his death, the influence of his great rival Michelangelo was more widespread until the 18th and 19th centuries, when Raphael’s more serene and harmonious qualities were again regarded as the highest models. His career falls naturally into three phases and three styles, first described by Giorgio Vasari: his early years in Umbria, then a period of about four years (1504-1508) absorbing the artistic traditions of Florence, followed by his last hectic and triumphant twelve years in Rome, working for two Popes and their close associates.
His father was court painter to the ruler of the small but highly cultured city of Urbino. He died when Raphael was eleven, and Raphael seems to have played a role in managing the family workshop from this point. He trained in the workshop of Perugino and was described as a fully trained “master” by 1500. He worked in or for several cities in north Italy until in 1508 he moved to Rome at the invitation of the pope, to work on the Vatican Palace. He was given a series of important commissions there and elsewhere in the city and began to work as an architect. He was still at the height of his career at his death in 1520.
Raphael was born in the small but artistically significant central Italian city of Urbino in the Marche region, where his father Giovanni Santi was court painter to the Duke. The reputation of the court had been established by Federico da Montefeltro, a highly successful condottiere who had been created Duke of Urbino by Pope Sixtus IV – Urbino formed part of the Papal States – and who died the year before Raphael was born. The emphasis of Federico’s court was more literary than artistic, but Giovanni Santi was a poet of sorts as well as a painter, and had written a rhymed chronicle of the life of Federico, and both wrote the texts and produced the decor for masque-like court entertainments. His poem to Federico shows him as keen to demonstrate awareness of the most advanced North Italian painters, and Early Netherlandish artists as well. In the very small court of Urbino he was probably more integrated into the central circle of the ruling family than most court painters.
Federico was succeeded by his son Guidobaldo da Montefeltro, who married Elisabetta Gonzaga, daughter of the ruler of Mantua, the most brilliant of the smaller Italian courts for both music and the visual arts. Under them, the court continued as a centre for literary culture. Growing up in the circle of this small court gave Raphael the excellent manners and social skills stressed by Vasari. Court life in Urbino at just after this period was to become set as the model of the virtues of the Italian humanist court through Baldassare Castiglione’s depiction of it in his classic work The Book of the Courtier, published in 1528. Castiglione moved to Urbino in 1504, when Raphael was no longer based there but frequently visited, and they became good friends. Raphael became close to other regular visitors to the court: Pietro Bibbiena and Pietro Bembo, both later cardinals, were already becoming well known as writers, and would later be in Rome during Raphael’s period there. Raphael mixed easily in the highest circles throughout his life, one of the factors that tended to give a misleading impression of effortlessness to his career. 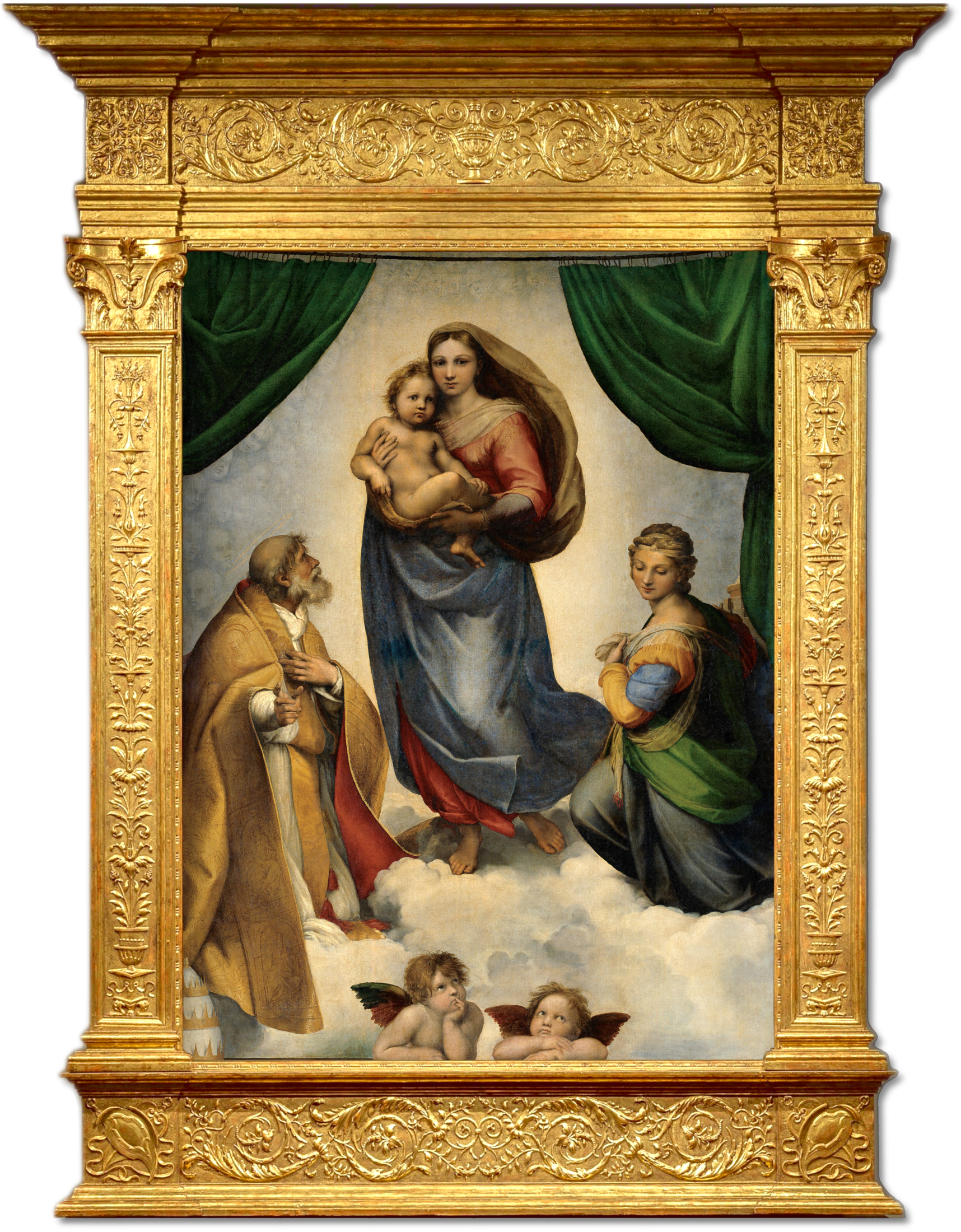 HE Sistine Madonna, also called the Madonna di San Sisto, is an oil painting by the Italian artist Raphael. The painting was commissioned in 1512 by Pope Julius II for the church of San Sisto, Piacenza. The canvas was one of the last Madonnas painted by Raphael. Giorgio Vasari called it “a truly rare and extraordinary work”.
The painting was moved to Dresden from 1754 and is well known for its influence in the German and Russian art scene. After World War II, it was relocated to Moscow for a decade before being returned to Germany.
(Source: Wikipedia)