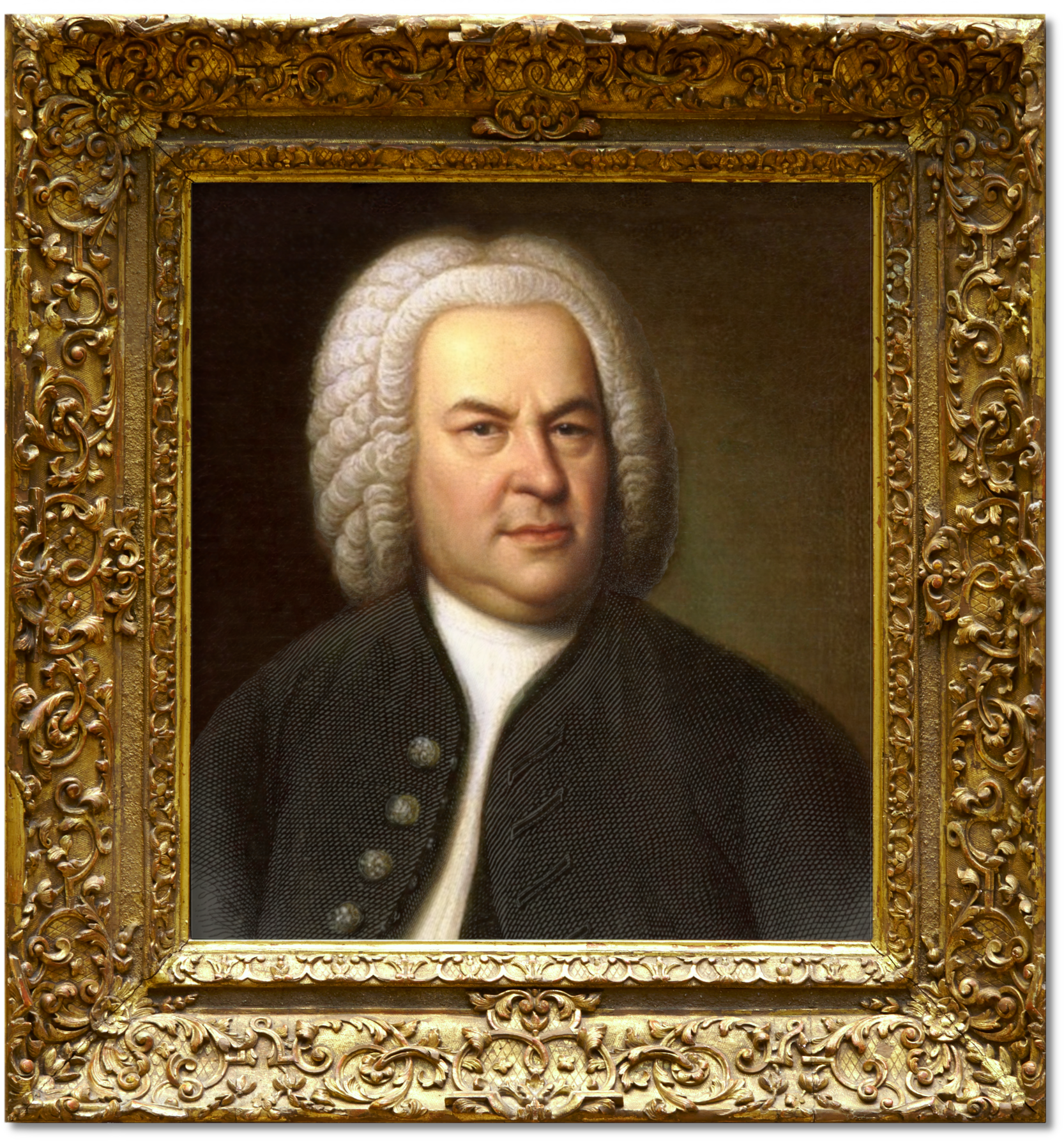 BACH was a German composer and musician of the Baroque period. He is known for instrumental compositions such as the Brandenburg Concertos and the Goldberg Variations, and for vocal music such as the St. Matthew’s Passion and the Mass in B minor. Since the 19th-century Bach Revival, he has been generally regarded as one of the greatest composers of all time.
The Bach family already counted several composers when Johann Sebastian was born as the last child of a city musician in Eisenach. After being orphaned at age 10, he lived for five years with his eldest brother Johann Christoph, after which he continued his musical formation in Lüneburg. From 1703 he was back in Thuringia, working as a musician for Protestant churches in Arnstadt and Mühlhausen and, for longer stretches of time, at courts in Weimar, where he expanded his organ repertory, and Köthen, where he was mostly engaged with chamber music. From 1723 he was employed as Thomaskantor (cantor at St. Thomas) in Leipzig. He composed music for the principal Lutheran churches of the city, and for its university’s student ensemble Collegium Musicum. From 1726 he published some of his keyboard and organ music. In Leipzig, as had happened during some of his earlier positions, he had difficult relations with his employer, a situation that was little remedied when he was granted the title of court composer by his sovereign, Augustus, Elector of Saxony and King of Poland, in 1736. In the last decades of his life he reworked and extended many of his earlier compositions. He died of complications after eye surgery in 1750 at the age of 65.
Bach enriched established German styles through his mastery of counterpoint, harmonic and motivic organization, and his adaptation of rhythms, forms, and textures from abroad, particularly from Italy and France. Bach’s compositions include hundreds of cantatas, both sacred and secular. He composed Latin church music, Passions, oratorios, and motets. He often adopted Lutheran hymns, not only in his larger vocal works, but for instance also in his four-part chorales and his sacred songs. He wrote extensively for organ and for other keyboard instruments. He composed concertos, for instance for violin and for harpsichord, and suites, as chamber music as well as for orchestra. Many of his works employ the genres of canon and fugue.
Throughout the 18th century Bach was primarily valued as an organist, while his keyboard music, such as The Well-Tempered Clavier, was appreciated for its didactic qualities. The 19th century saw the publication of some major Bach biographies, and by the end of that century all of his known music had been printed. Dissemination of scholarship on the composer continued through periodicals (and later also websites) exclusively devoted to him, and other publications such as the Bach-Werke-Verzeichnis (BWV, a numbered catalogue of his works) and new critical editions of his compositions. His music was further popularised through a multitude of arrangements, including, for instance, the Air on the G String, and of recordings, such as three different box sets with complete performances of the composer’s oeuvre marking the 250th anniversary of his death.
Bach was born in 1685 in Eisenach, in the duchy of Saxe-Eisenach, into an extensive musical family. His father, Johann Ambrosius Bach, was the director of the town musicians, and all of his uncles were professional musicians. His father probably taught him to play the violin and harpsichord, and his brother Johann Christoph Bach taught him the clavichord and exposed him to much of the contemporary music. Apparently on his own initiative, Bach attended St. Michael’s School in Lüneburg for two years. After graduating, he held several musical posts across Germany, including Kapellmeister (director of music) to Leopold, Prince of Anhalt-Köthen, and Thomaskantor in Leipzig, a position of music director at the main Lutheran churches and educator at the Thomasschule. He received the title of “Royal Court Composer” from Augustus III in 1736. Bach’s health and vision declined in 1749, and he died on 28 July 1750.
(Source: Wikipedia) 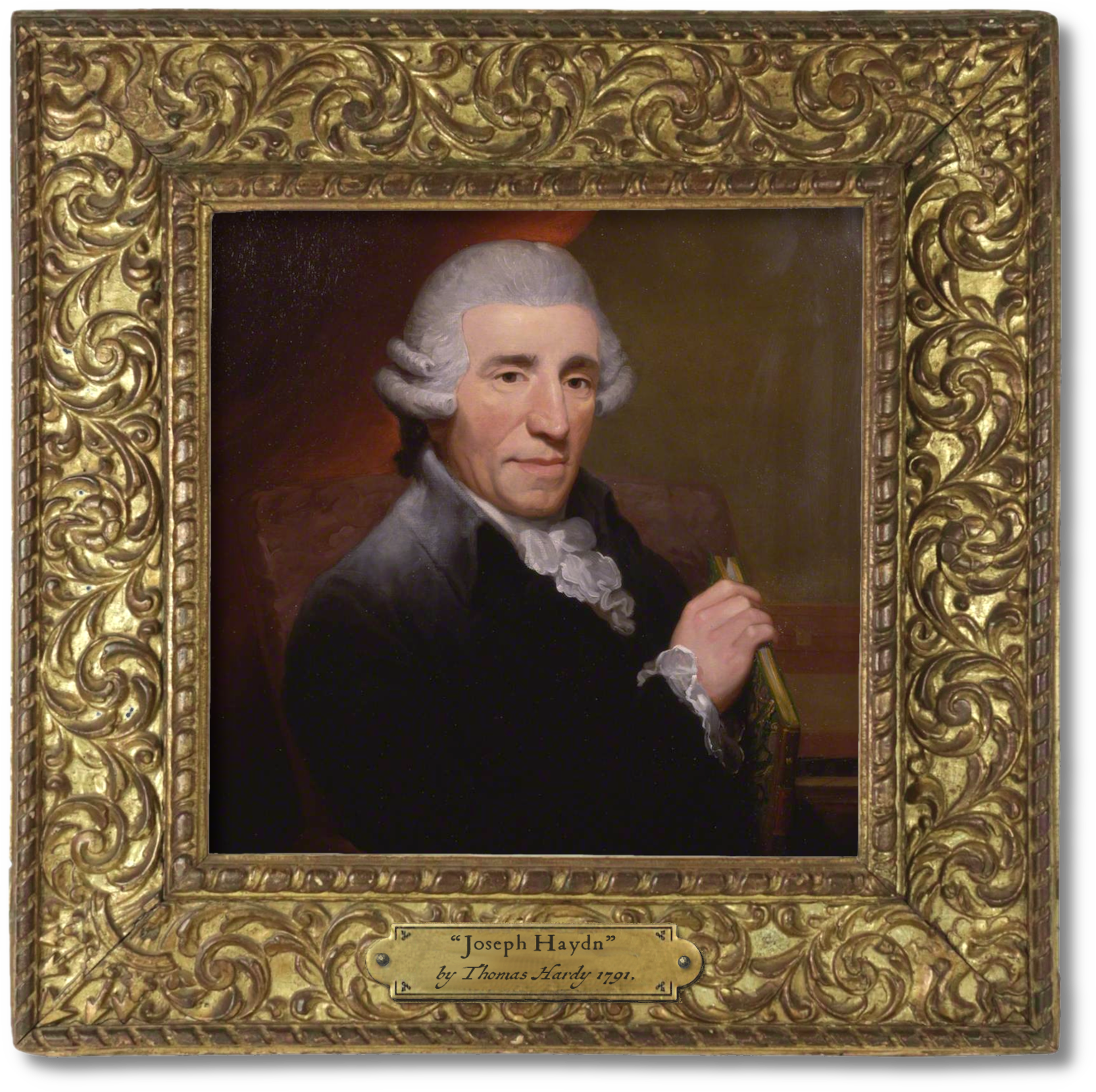 HAYDN was an Austrian composer of the Classical period. He was instrumental in the development of chamber music such as the piano trio. Haydn spent much of his career as a court musician for the wealthy Esterházy family at their remote estate. Until the later part of his life, this isolated him from other composers and trends in music so that he was, as he put it, “forced to become original.” Yet his music circulated widely, and for much of his career he was the most celebrated composer in Europe.
He was a friend and mentor of Mozart, a tutor of Beethoven, and the older brother of composer Michael Haydn.
James Webster writes of Haydn’s public character thus: “Haydn’s public life exemplified the Enlightenment ideal of the honnête homme (honest man): the man whose good character and worldly success enable and justify each other. His modesty and probity were everywhere acknowledged. These traits were not only prerequisites to his success as Kapellmeister, entrepreneur and public figure, but also aided the favorable reception of his music.” Haydn was especially respected by the Esterházy court musicians whom he supervised, as he maintained a cordial working atmosphere and effectively represented the musicians’ interests with their employer; see Papa Haydn and the tale of the “Farewell” Symphony. Haydn had a robust sense of humor, evident in his love of practical jokes and often apparent in his music, and he had many friends. For much of his life he benefited from a “happy and naturally cheerful temperament,” but in his later life, there is evidence for periods of depression, notably in the correspondence with Mrs. Genzinger and in Dies’s biography, based on visits made in Haydn’s old age.
Haydn was a devout Catholic who often turned to his rosary when he had trouble composing, a practice that he usually found to be effective. He normally began the manuscript of each composition with “in nomine Domini” (“in the name of the Lord”) and ended with “Laus Deo” (“praise be to God”).
Haydn’s early years of poverty and awareness of the financial precariousness of musical life made him astute and even sharp in his business dealings. Some contemporaries (usually, it has to be said, wealthy ones) were surprised and even shocked at this. Webster writes: “As regards money, Haydn…always attempted to maximize his income, whether by negotiating the right to sell his music outside the Esterházy court, driving hard bargains with publishers or selling his works three and four times over to publishers in different countries; he regularly engaged in ‘sharp practice’” which nowadays might be regarded as plain fraud. But those were days when copyright was in its infancy, and the pirating of musical works was common. Publishers had few qualms about attaching Haydn’s name to popular works by lesser composers, an arrangement that effectively robbed the lesser musician of livelihood. Webster notes that Haydn’s ruthlessness in business might be viewed more sympathetically in light of his struggles with poverty during his years as a freelancer-and that outside of the world of business, in his dealings, for example, with relatives, musicians and servants, and in volunteering his services for charitable concerts, Haydn was a generous man – offering to teach the two infant sons of Mozart for free after their father’s death. When Haydn died he was certainly comfortably off, but by middle class rather than aristocratic standards.
Haydn was short in stature, perhaps as a result of having been underfed throughout most of his youth. He was not handsome, and like many in his day he was a survivor of smallpox; his face was pitted with the scars of this disease. His biographer Dies wrote: “he couldn’t understand how it happened that in his life he had been loved by many a pretty woman. ‘They couldn’t have been led to it by my beauty.’”
His nose, large and aquiline, was disfigured by the polyps he suffered during much of his adult life, an agonizing and debilitating disease that at times prevented him from writing music.

Die Schöpfung is an oratorio written between 1797 & 1798 by Joseph Haydn and considered by many to be one of his masterpieces. The oratorio depicts and celebrates the creation of the world as described in Genesis.
The first public performance was held in Vienna at the old Burgtheater on the 19th of March, 1799. And presented here by the Lawrence Symphony Orchestra & Choirs on the 29th of April, 2016.
[sc_embed_player fileurl="https://ahamagi.org/wp-content/uploads/2020/04/The-Creation-by-Franz-Joseph-Haydn.mp3"]
Be ye kind one to another...