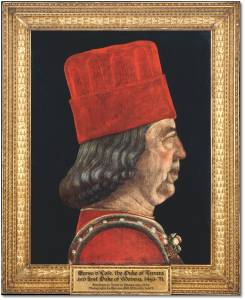 Borso d’Este was an illegitimate son of Niccolo iii d’Este, Marquess of Ferrara, Modena and Reggio, and his mistress Stella de’ Tolomei. Borso succeeded Leonello d’Este in the marquisate on October 1, 1450.
On May 18, 1452 he received confirmation over his fiefs, as Duke, by Emperor Frederick, iii. On April 12, 1471, in St. Peter’s Basilica, he was also appointed as Duke of Ferrara by Pope Paul, ii.
Borso’s court was the center of the so-called Ferrarese school of painting, whose members included Francesco del Cossa, Ercole dei Roberti and Cosimo Tura. Their most important commission during Borso’s rule were the frescoes in the Palazzo Schifanoia and the Borso d’Este Bible featuring the miniatures of Taddeo Crivelli and Franco dei Russi. He also protected numerous musicians, including Pietrobono del Chitarrino, Niccolo Todesco e Blasio Montolino. This Masterpiece is presented here for your edification.

The magnificent Bible of Borso d’Este represents the zenith of Ferrarese miniature painting and one of the highpoints of Italian Renaissance manuscript illumination. It was commissioned by Borso d’Este (1413-71), the first duke of Ferrara, who intended it as a demonstration of the splendor of the House of Este, which at the time was competing with Florence and the court of the Medici for international status. The manuscript was completed between 1455 and 1461, the same time that Johann Gutenberg was producing the first printed Bible from moveable type. The Bible consists of two folio volumes of more than 1,000 individual illuminations. The leaves are all richly illuminated, with painted vignettes that portray scenes from the Bible, historical events, the Estense coat of arms, and views of nature. The beginning of each of the books of the Bible is decorated with an elaborate architectural border and richly colored designs. The illuminations are by a team of artists led by Taddeo Crivelli and Franco dei Russi that also included Girolamo da Cremona, Marco dell’Avogadro, and Giorgio d’Alemagna. The text was written in a fine Renaissance hand by the Bolognese scribe Pietro Paolo Marone. In 1598, following the transfer of Ferrara to papal control, the Estense family abandoned Ferrara for its new seat of ducal power in Modena, taking with them their paintings, sculptures, and books. The Bible remained in Modena until 1859, when the city became part of the new Kingdom of Italy. Francesco V d’Austria-Este fled to Vienna, taking with him many family possessions, including the Bible. In 1923, the industrialist Giovanni Treccani degli Alfieri acquired the Bible from a Parisian antiquarian bookseller. As a sign of respect for the Republic of Italy, he returned the Bible to the Biblioteca Estense in Modena. In the second half of the 18th century a new binding was made. The Bible was crudely trimmed and part of its decoration was lost from the upper and outer margins. The binding was again replaced in 1961 but isn’t shown here. The book cover here is only present in this current digital form. 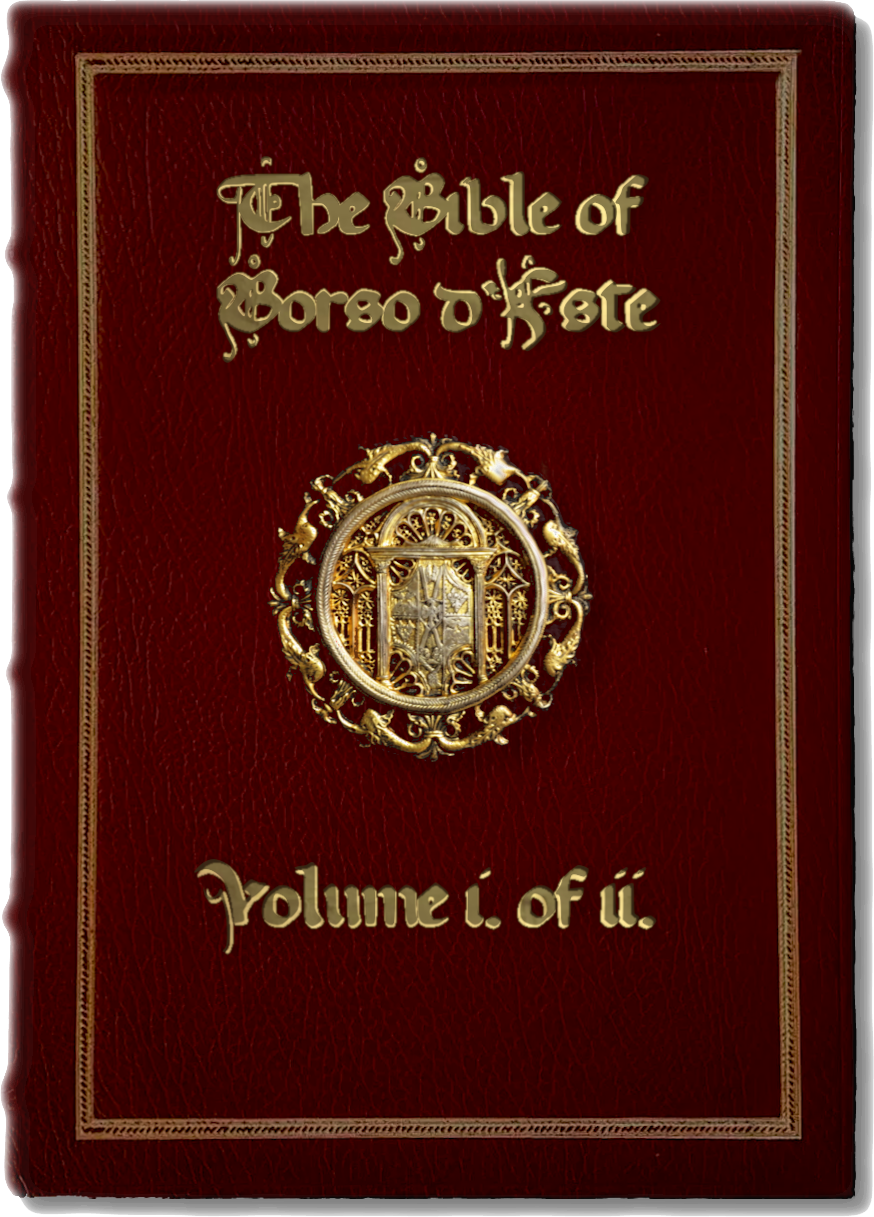 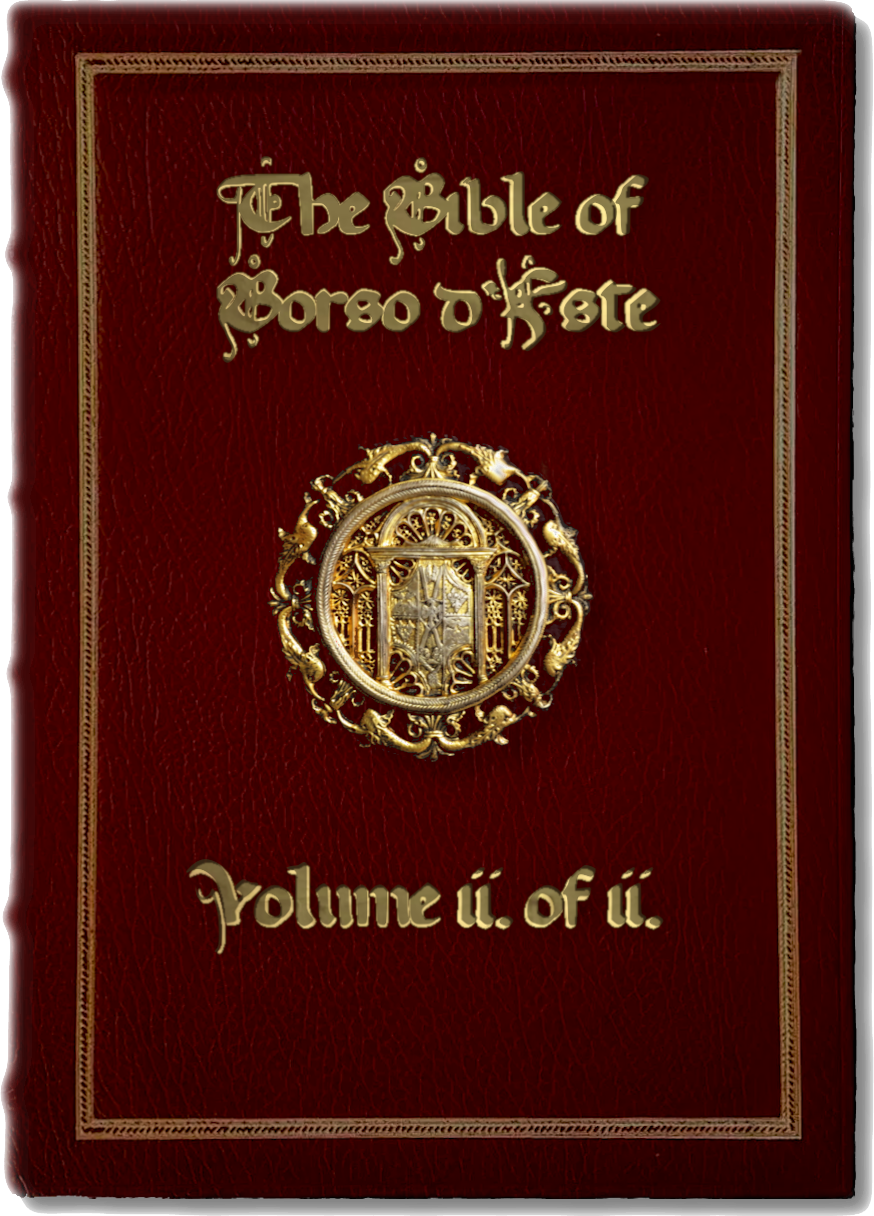 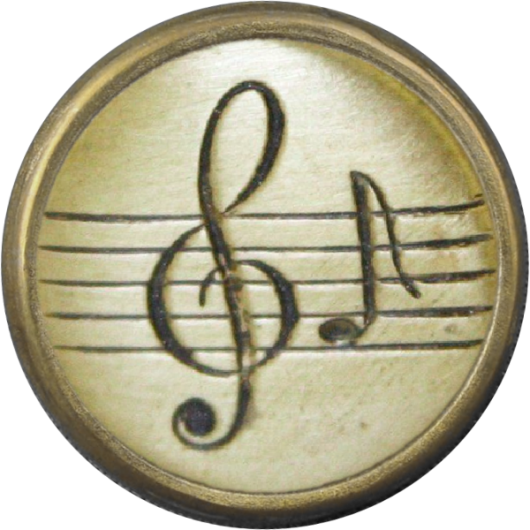