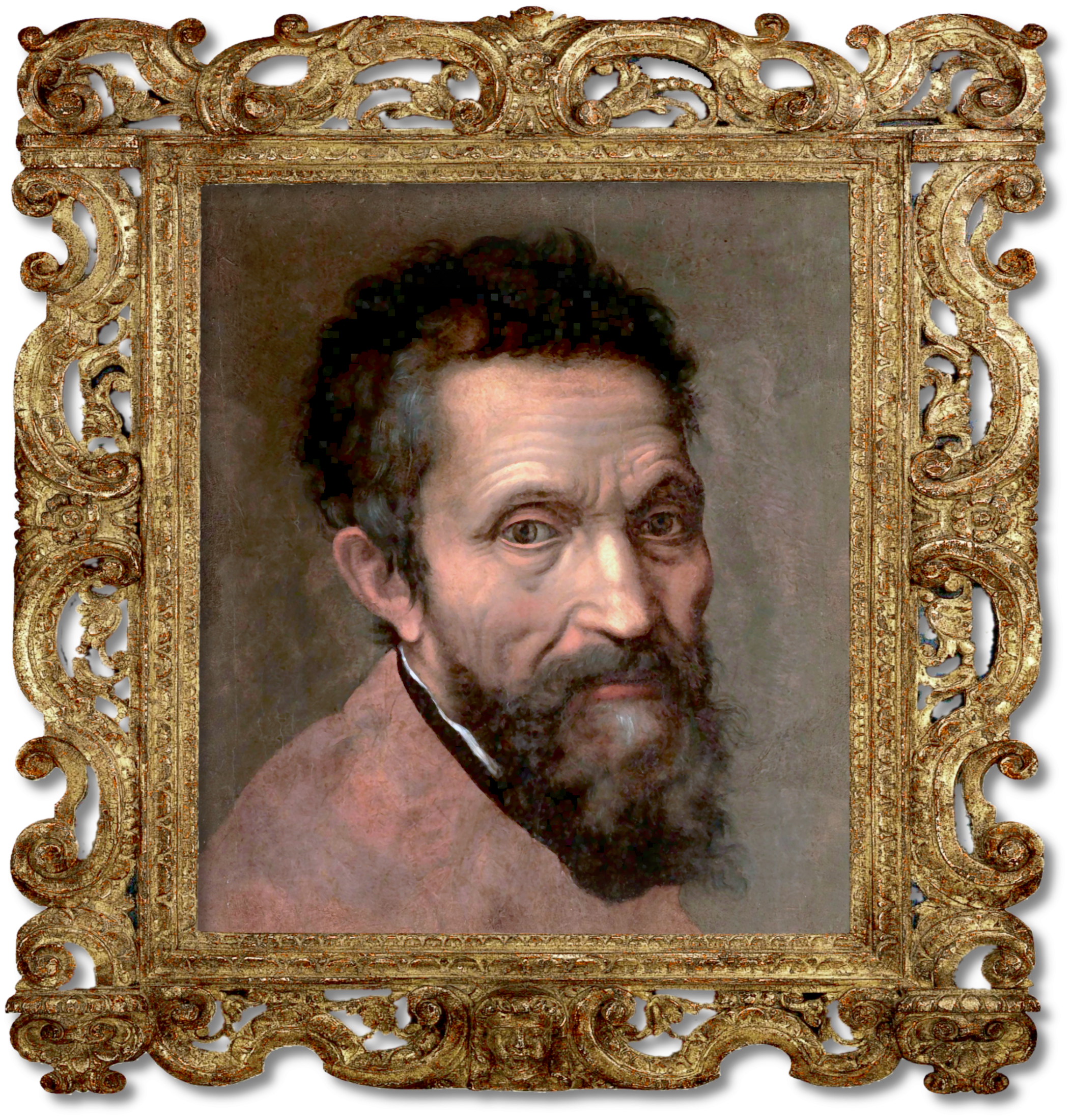 ICHELANGELO di Lodovico Buonarroti Simoni, known best as simply Michelangelo, was an Italian sculptor, painter, architect and poet of the High Renaissance born in the Republic of Florence, who exerted an unparalleled influence on the development of Western art. His artistic versatility was of such a high order that he is often considered a contender for the title of the archetypal Renaissance man, along with his rival, the fellow Florentine, Leonardo da Vinci. Several scholars have described Michelangelo as the greatest artist of his age and even as the greatest artist of all time.
A number of Michelangelo’s works of painting, sculpture and architecture rank among the most famous in existence. His output in these fields was prodigious; given the sheer volume of surviving correspondence, sketches and reminiscences, he is the best-documented artist of the 16th century. He sculpted two of his best-known works, the Pietà and David, before the age of thirty. Despite holding a low opinion of painting, he also created two of the most influential frescoes in the history of Western art: the scenes from Genesis on the ceiling of the Sistine Chapel in Rome, and The Last Judgment on its altar wall. His design of the Laurentian Library pioneered Mannerist architecture. At the age of 74, he succeeded Antonio da Sangallo the Younger as the architect of St. Peter’s Basilica. He transformed the plan so that the western end was finished to his design, as was the dome, with some modification, after his death.
Michelangelo was the first Western artist whose biography was published while he was alive. In fact, two biographies were published during his lifetime. One of them, by Giorgio Vasari, proposed that Michelangelo’s work transcended that of any artist living or dead, and was “supreme in not one art alone but in all three”.
In his lifetime, Michelangelo was often called Il Divino (“the divine one”). His contemporaries often admired his terribilità – his ability to instil a sense of awe.
Attempts by subsequent artists to imitate Michelangelo’s impassioned, highly personal style resulted in Mannerism, the next major movement in Western art after the High Renaissance. Michelangelo was a devout Catholic whose faith deepened at the end of his life.
His poetry includes the following closing lines from what is known as poem 285 (written in 1554); “Neither painting nor sculpture will be able any longer to calm my soul, now turned toward that divine love that opened his arms on the cross to take us in.”
(Source: Wikipedia) 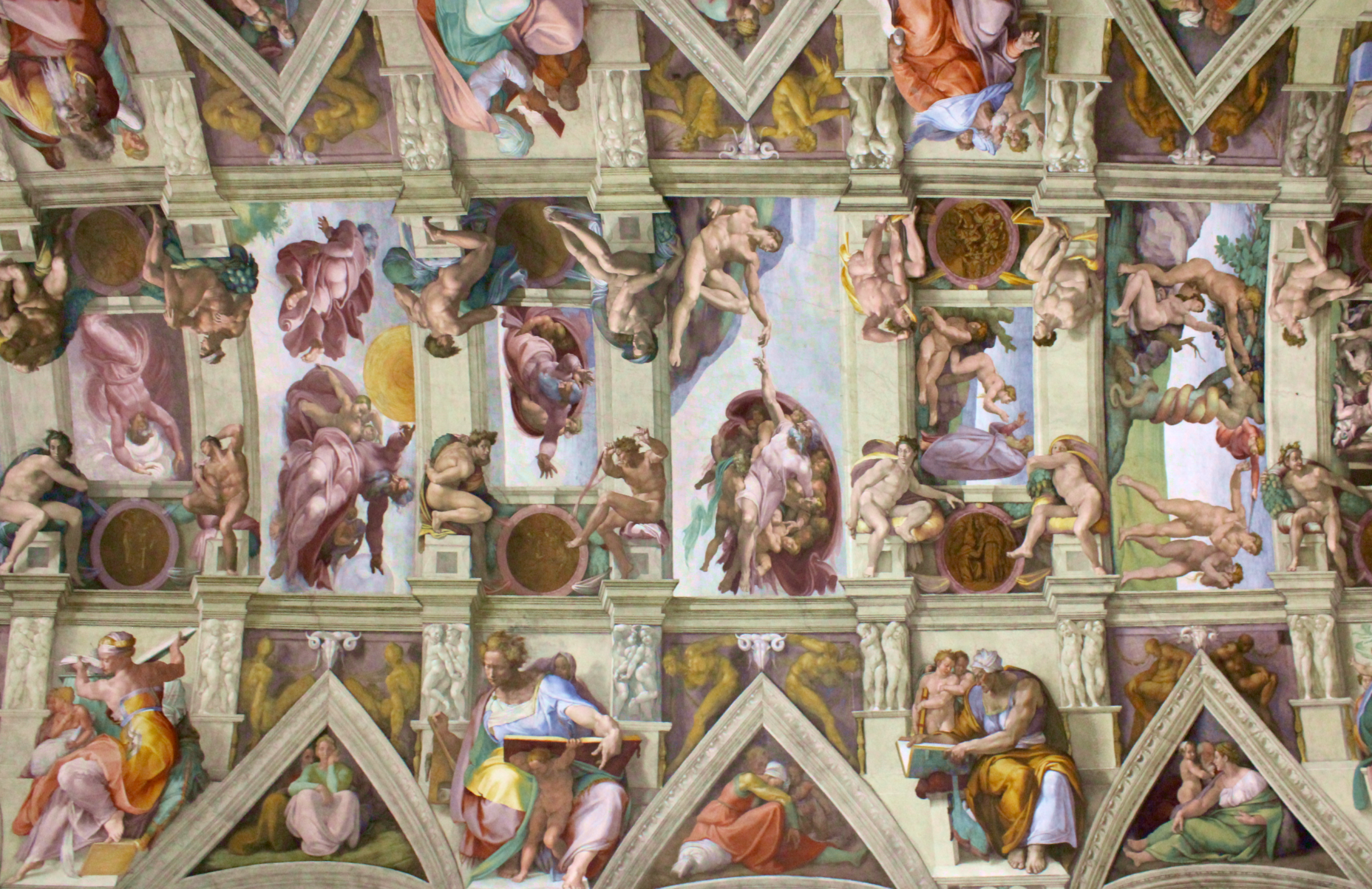 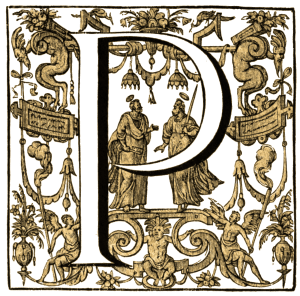 AINTED by the Master between 1508 and 1512, The Sistine Chapel ceiling (Italian: Volta della Cappella Sistina) is a cornerstone work of High Renaissance art. The ceiling is part of the Sistine Chapel, the large papal chapel built within the Vatican between 1477 and 1480 by Pope Sixtus IV, for whom the chapel is named.
It was painted at the commission of Pope Julius II. The chapel is the location for papal conclaves and many other important services.
The ceiling’s various painted elements form part of a larger scheme of decoration within the Chapel, which includes the large fresco The Last Judgement on the sanctuary wall, also by Michelangelo, wall paintings by several leading painters of the late 15th century including Sandro Botticelli, Domenico Ghirlandaio and Pietro Perugino, and a set of large tapestries by Raphael, the whole illustrating much of the doctrine of the Catholic Church.
Central to the ceiling decoration are nine scenes from the Book of Genesis, of which The Creation of Adam is the best known, having an iconic standing equalled only by Leonardo da Vinci’s Mona Lisa, the hands of God and Adam being reproduced in countless imitations. The complex design includes several sets of individual figures, both clothed and nude, which allowed Michelangelo to fully demonstrate his skill in creating a huge variety of poses for the human figure and which have provided an enormously influential pattern book of models for other artists ever since.
(Source: Wikipedia)

“The Nine Panels of Genesis” 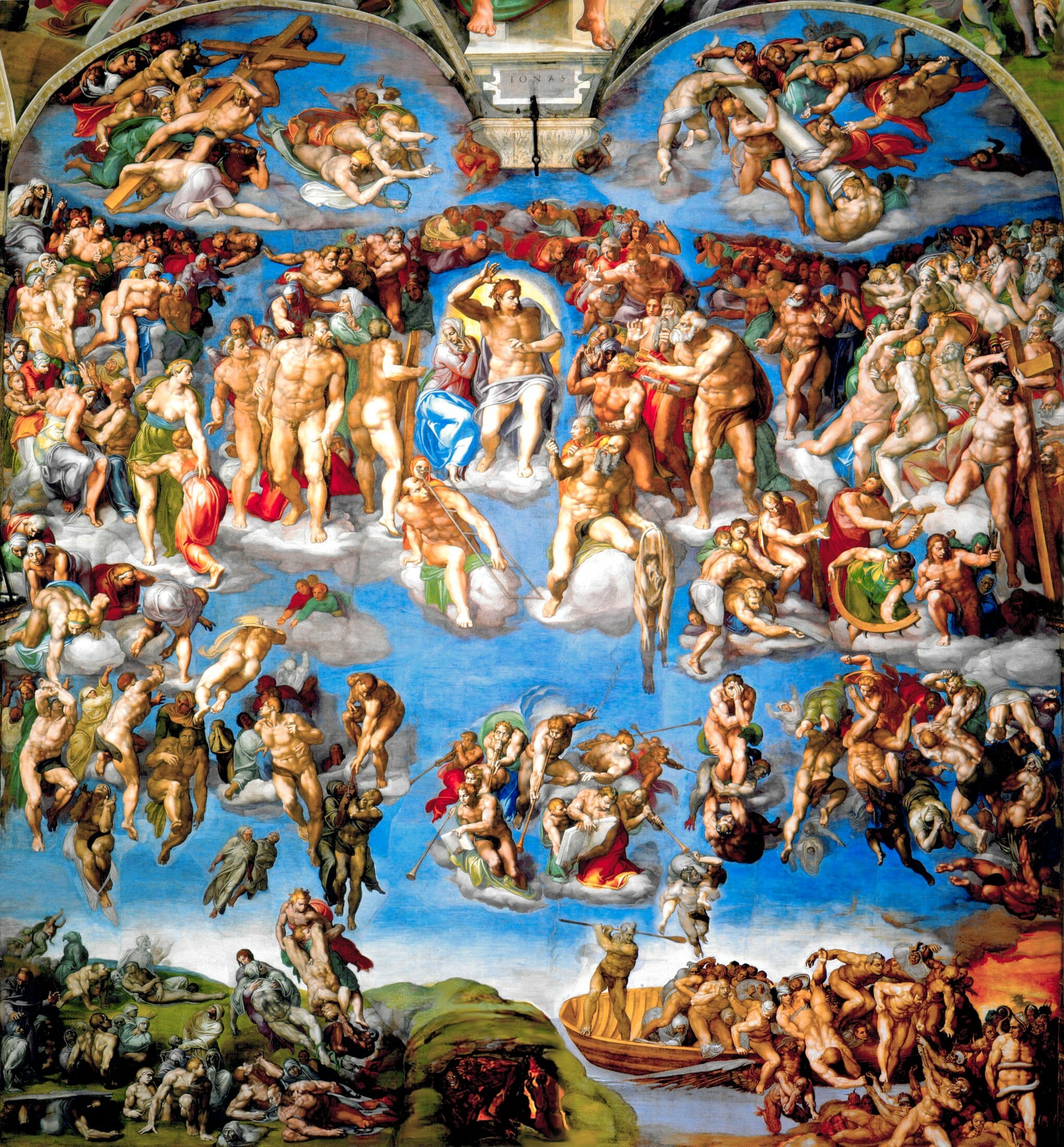 ICHELANGELO’S “Last Judgment” is a masterpiece of human genius of the Italian Renaissance. It covers the entire altar wall of the Sistine Chapel in Vatican City and is a depiction of the Second Coming and Christ’s final judgment of humanity. The dead rise and descend to their fates, as judged by Christ; who is surrounded by prominent saints. Altogether there are over 300 figures, with nearly all the males and angels originally shown as nudes; many were later partly covered up by painted draperies, of which some remain after recent cleaning and restoration.
The work took over four years to complete between 1536 and 1541 (preparation of the altar wall began in 1535). Michelangelo began working on it twenty-five years after having finished the Sistine Chapel ceiling and was nearly 67 at its completion. He had originally accepted the commission from Pope Clement VII, but it was completed under Pope Paul III whose stronger reforming views probably affected the final treatment.
In the lower part of the fresco, Michelangelo followed tradition in showing the saved ascending at the left and the damned descending at the right. In the upper part, the inhabitants of Heaven are joined by the newly saved. The fresco is more monochromatic than the ceiling frescoes and is dominated by the tones of flesh and sky. The cleaning and restoration of the fresco, however, revealed a greater chromatic range than previously apparent. Orange, green, yellow, and blue are scattered throughout, animating and unifying the complex scene.
The reception of the painting was mixed from the start, with much praise but also criticism on both religious and artistic grounds. Both the amount of nudity and the muscular style of the bodies has been one area of contention, and the overall composition another.
(Source: Wikipedia)