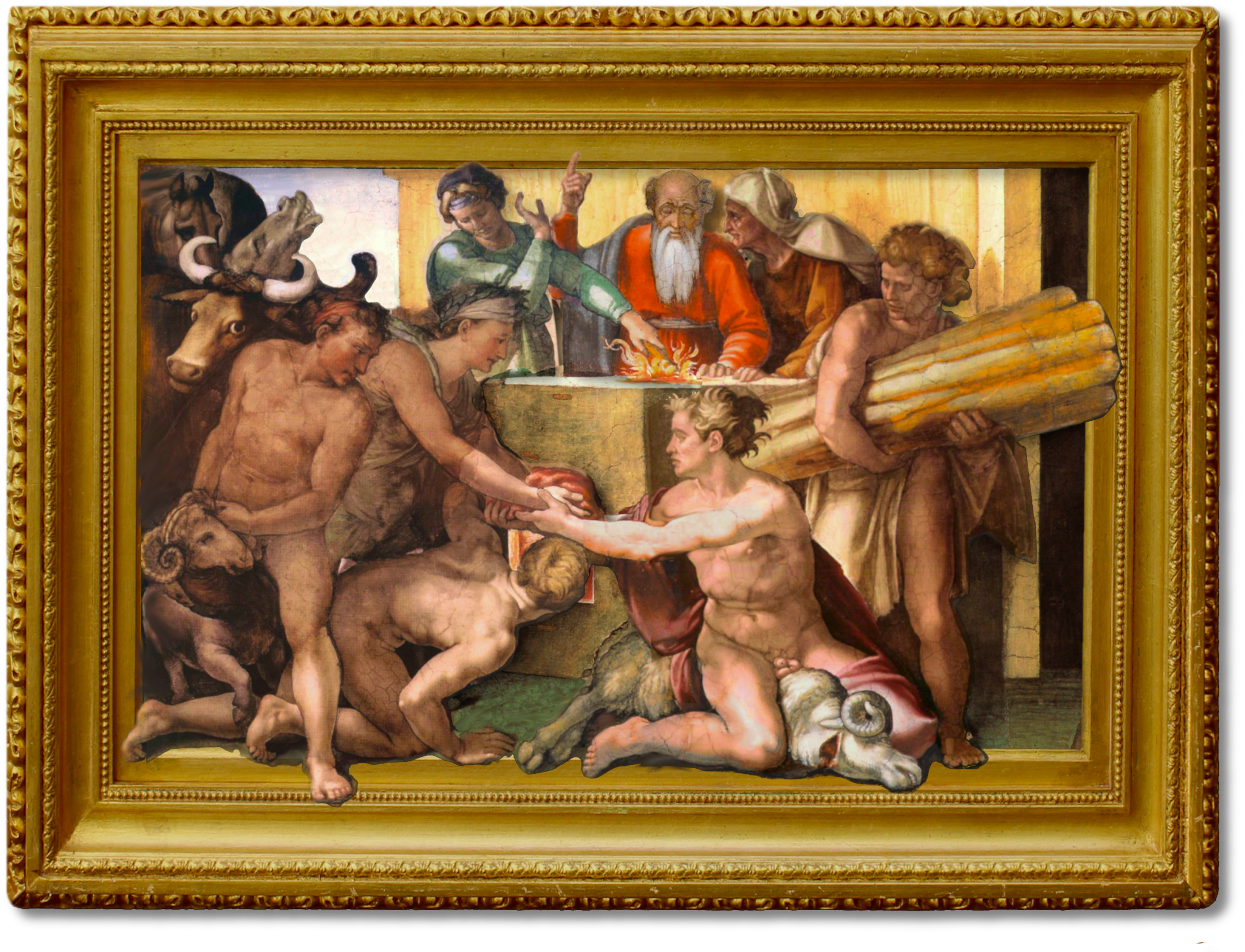 OAH’S SACRIFICE is a fresco by Michelangelo Buonarroti, dating from about 1508-1510 and part of the decoration of the vault of the Sistine Chapel, in the Vatican Museums in Rome, commissioned by Julius II.
It is part of the nine Stories of Genesis, in particular it is the third to the last of the series, and the first of the three Stories of Noah, although it should follow, and not precede, the next scene of the Universal Flood. This may be related to symbolic reading of the scenes, but more likely it was primarily related to the desire to reserve one of the major boxes for the Flood.
These scenes went to compose a mosaic of the stories of humanity “ante legem,” that is, before Moses (whose stories are found in the panes on the walls by fifteenth century artists). Each of these scenes of Genesis also had a backward reading linked to the foreshadowing of Holy Week, whose solemn celebrations took place in the chapel and provided for a procession that from the ceremonial entrance came to the altar.
The scene shows the sacrifice Noah made after saving himself with the ark from the flood, making peace with God: it is a fundamental moment in the stories of Salvation, for from the descendants of Noah will come the generations that will lead the people of Israel to the liberation from slavery and the coming of Christ.
The fresco, with a sharp and rather orderly composition, takes up the pattern of the ancient reliefs (Suovetaurilia), with the sacrifice in the center towards which the janitors converge with the animals in tow: two rams, a bull, two horses, even an elephant, barely visible in the background. The patriarch wears the same red tunic that is also seen in the background scene of Noah’s Intoxication. On the right you can see the elderly wife in profile, perhaps the work of collaborators, for the stiffer contours and a more summary model. The same goes for the young woman on the left dressed in green, who is helping to light the fire on the macaw with a torch and protects her face with one hand: it is a quote from a Roman sarcophagus with the story of Melagro.
In the foreground you can see a boy carrying a fascination with firewood and a young man who, sitting naked on a ram just cleared, is taking from the hands of another the entrails of an animal to vaccinate. Another young man, even naked, is behind him with his head facing the opening with fire inside the altar, to control it as if it were a furnace and maybe blow us to help him.
(Source: Wikipedia)