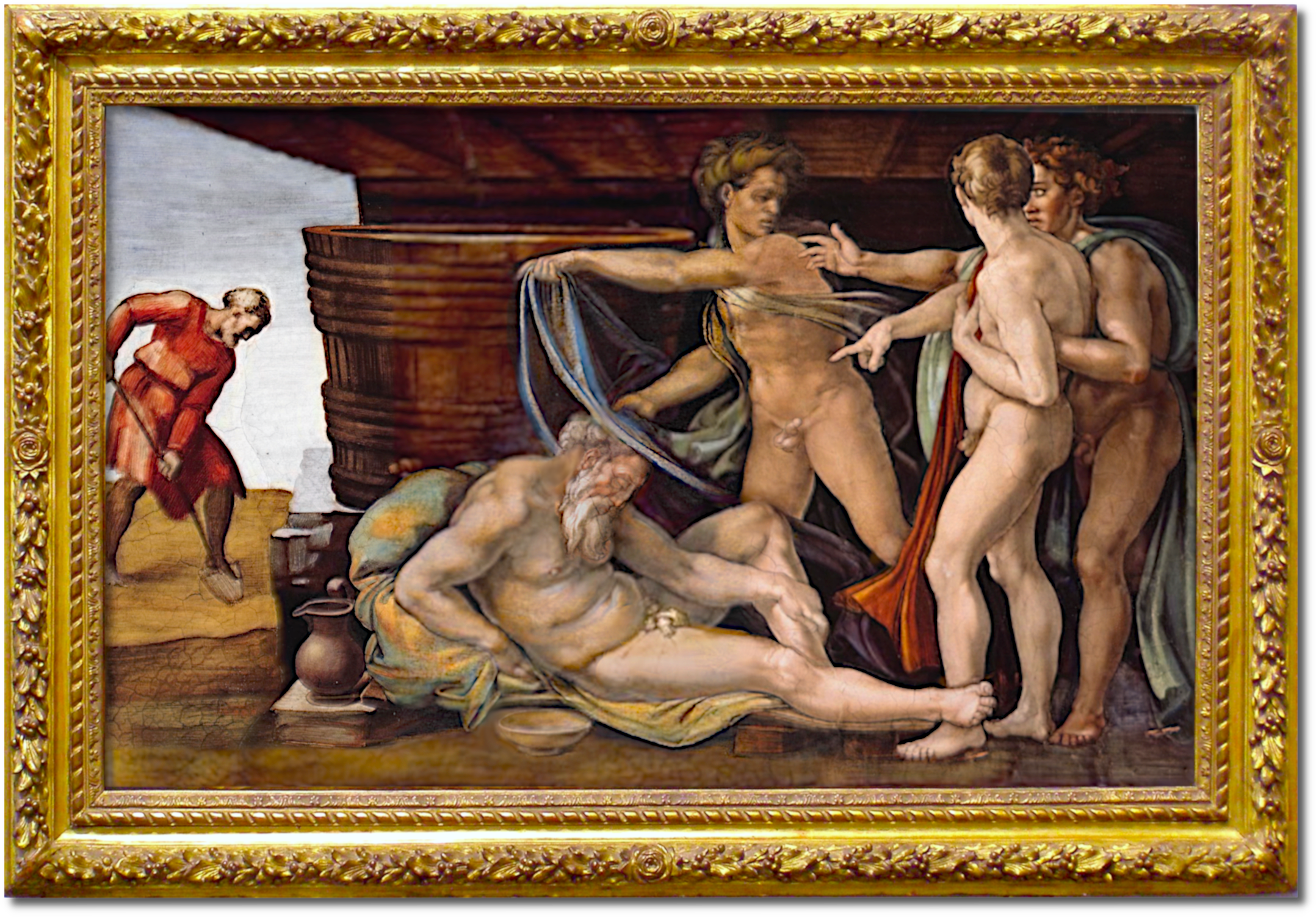 OAH’S DRUNKENESS is part of the nine Stories of Genesis, in particular it is the last in the series, which also concludes the three Noah stories of the last panes. These scenes compose a mosaic of the stories of humanity “ante legem”, that is, before Moses (whose stories are found in the panes on the walls by fifteenth century artists).
The biblical account tells how Ham after seeing his father Noah drunk and lying naked on the ground commits some unknown offense, perhaps mocking his father for his nakedness. After the incident he warns his brothers of their father’s state. Sem and Iaphet then go to cover their father’s nakedness with a cape by walking backwards.
Michelangelo sets his scene with the body of the patriarch, drunk and drowsy, lying on a slightly raised bed with planks along the lower margin. Next to him are a pitcher and a bowl. His sons occupy the right of the panel and are oddly trying to cover their father’s nakedness despite they themselves being naked. Noah upon his awakening and his learning of the episode, reacts harshly and curses Ham’s lineage. On the left side of the panel, we are presented with the previous scene, where Noah is seen clearing the land for his vineyard.
The panel represents the story of the curse of Ham which is found in Genesis 9:20-27. It has been popularly speculated that the objective of the story may have been to justify the subjugation of the Canaanites, the descendants of Ham, to the Israelites, the descendants of Shem.

Genesis 9:20 And Noah began to be an husbandman, and he planted a vineyard:
21 And he drank of the wine, and was drunken; and he was uncovered within his tent.
22 And Ham, the father of Canaan, saw the nakedness of his father, and told his two brethren without.
23 And Shem and Japheth took a garment, and laid it upon both their shoulders, and went backward, and covered the nakedness of their father; and their faces were backward, and they saw not their father’s nakedness.
24 And Noah awoke from his wine, and knew what his younger son had done unto him.
25 And he said, Cursed be Canaan; a servant of servants shall he be unto his brethren.
26 And he said, Blessed be the Lord God of Shem; and Canaan shall be his servant.
27 God shall enlarge Japheth, and he shall dwell in the tents of Shem; and Canaan shall be his servant.
(Source: Wikipedia)